The series comprised of four lessons will introduce creative methods employed by documentary filmmakers during the production of their films. In order to get a better insight into documentary filmmaking, it is necessary to find out more about the processes used by the filmmakers, what decisions they have to take and how they can use the available means of expression. Students learn how to identify not only what the film is about, but also how it communicates with the viewer, how it was made, and how it works in different contexts. This scheme focuses on methods employed during the making of documentary films, on how the views they strive to convey are constructed and what means are used to demonstrate its perspective. It also enables to uncover and problematize the utilized methods and means, shows how the film communicates with the audience and helps identify manipulative strategies and ask ethical questions.

The course consists of four or alternatively three lessons. The opening lesson is conceived as a lecture with film clips. The next three (two) lessons will have the form of a film screening followed by an interactive analysis, with the main focus on creative methods.
The course has two alternative versions: for beginners and for the advanced. The four-lesson variant ends with a lesson including a film with English subtitles.

The choice between the Basic and Advanced version depends on a recommendation from CDF.

The opening lessons will present selected documentary filmmaking methods, including their historical development, illustrated by film clips. It will introduce the fundaments of observational film (based on observation), investigative film (searching to solve a mystery or unravel an unexplained story), engaged film (presenting a specific insight into a certain problem and offering a solution), diary film (capturing the personal space and author’s internal feelings), visually anthropological films (introducing remote and unknown cultures). It will also address issues of the im/possibility of unbiased observation, the limits of propaganda and ethical issues. Each of the methods is analysed in terms of the typical creative techniques, methods of working with expression means and their influence on the perception and interpretation of film works.

This lesson will focus on edited films. It will describe creative work with found material that can be adopted either from known or unknown sources. The illustrative example belongs among edited compilations from family films. The analysed film, Low-level Flight by Czech director Jan Šikl, is a gripping story depicting the life of a family of an army pilot. In addition to the creative approach to the compilation, with sensitivity towards the original information value of the family archives, the film shows the possibility to use private history to reveal a different view of the great social-historical context. The lesson for the advanced will also deal with historical specifics of amateur family cinema.

The lesson will present the sociological genre of observational film following the stories of selected characters over many years. A specific example will illustrate the approach of production-intensive year-long meetings of the director with the protagonists, taking place on the basis of a mutual dialogue, continuous observation of the fates of the individual characters as well as a deeper relationship with the director. The analysed film Private Universe, by Czech director Helena Třeštíková is a unique 37-year long observation of the life story of director’s friend’s son starting from pregnancy until Honza’s adult age. It follows the fates of Honza and his entire family, at the same time providing a powerful testimony on the changing times after the normalisation in socialist Czechoslovakia until the establishment of the Czech Republic as a modern European country.

The lesson will focus on various forms of staging as a documentary filmmaking method which ranges from partial interventions of the director in the individual situations to creating a script, based on facts and research, played by real characters, or actors (in the case of docudrama). The specific case shows an approach with director’s transparent interventions during the installation of the scenes and situations, in which authentic characters appear and the plot is based on factual accuracy stemming from the precise film development stage. The analysed film, Cooking History, by the Slovak director Peter Kerekes tells the history of war conflicts from World War 2 to the war in Chechnya through stories of army cooks, their attitudes, and recipes. This poetic film draws on an extensive research conducted prior to the making of the film and it works with staged situations, in which real cooks talk about their authentic experiences.

Andrea Slováková, documentarian, curator, pedagogue, member of Ji.hlava IDFF‘s management in the years 2003 – 2011, where she is currently a member of the editorial board of the Dok.revue journal, director of AMU Press publishers in Prague in the years 2012 – 2015. As a lecturer, she teaches at the Masaryk University in Brno. She is also the founder of Nová beseda publishing house. 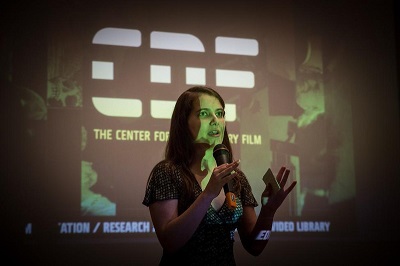